Sales manager at Wilson Process Systems, Steve Cooke, asks what post-Brexit Britain will look like if Government and industry don't collaborate to make electronics, and manufacturing as whole, an exciting career path

With ongoing speculation around whether the UK will eventually leave the EU and fear and uncertainty surrounding Britain’s possible post-Brexit future, there doesn’t appear to be any focus on the imbalance in our economy, which is weighted towards services, over and above manufacturing.

There are many, however, that believe opportunity for post-Brexit Britain lies in a structural shift in demand towards UK goods and UK manufacturing. That's something the UK electronics industry has been championing for quite some time, whether we leave the EU or not. Shouldn't current events provide a wake-up call to industry and politicians alike? If a post- Brexit future has any chance of success, the UK needs to step up its help towards UK manufacturers, to win back some of the business that has been lost to globalization.

Cutting EU red tape would reduce costs and open up new markets, and many SMEs’ key skills, supported by immigration, will still offer a wealth of experience that can be passed on to British trainees. Meanwhile Government must increase its provision for vocational training to develop a competitive British workforce at grass roots level.

New talent is needed
This could be a problem, however, as education in schools often portrays UK manufacturing jobs/roles as undesirable options; this would appear to be true in a number of areas within the electronics industry. In the 80s/90s and 2000s, a career in electronics, whether it be distribution, engineering or subcontracting, would be common place, but there now appears to be limited talent coming through the ranks.

Today, at engineering shows, you might see a group of students lucky enough to be on apprenticeships or associated courses, but in general, there still doesn’t seem to be enough new blood being attracted into the electronics industry.

Perhaps the fundamental issue lies with UK manufacturing as a whole? I appreciate that many OEMs have relocated their manufacturing facilities to distant shores over the years, but there are still up and coming sectors, such as smart power, autonomous vehicles, robotic systems and green energy infrastructure, to name but a few. These emerging sectors require new talent, but the Government needs to do more to make careers in these areas more appealing to prospective candidates.

Schools and colleges also need to make the sector more attractive to ensure the UK continues to attract and inspire students to pursue careers in engineering and electronics to help stem the decline.

Whichever way Brexit plays out, the UK needs to take a serious look at making UK manufacturing more attractive to all industries. In my opinion, the service sectors won’t be enough to see the UK through without creating greater division between north and south. 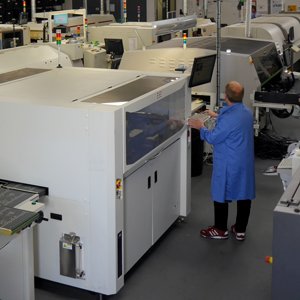